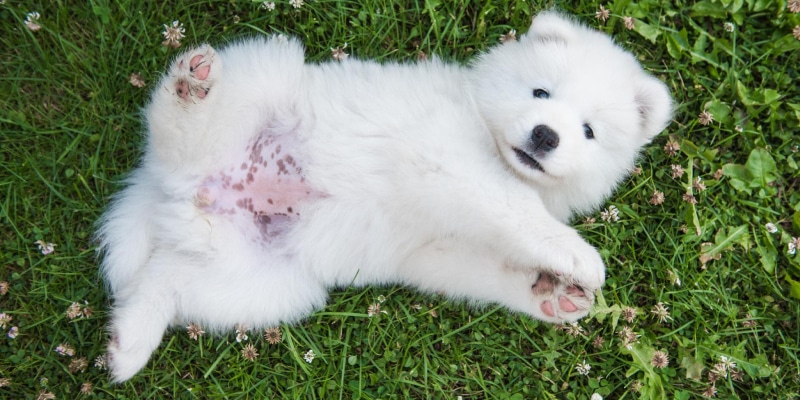 Belly buttons are pretty easy to see on us, humans. It doesn’t matter whether the shape and form are odd. What about our pets? Have you ever stopped and thought, do dogs have belly buttons? Of course, some have always wondered about this question. It would be intriguing what the answer truly is!

To answer this question plainly, do dogs have belly buttons? The answer is yes. Dogs do have belly buttons, but there’s more to that! This article will discuss the facts and other things you need to know about your dog’s tummy stamp.

So, here’s all the info you need about dog belly buttons! You can take down notes if you like. If you’re interested in getting to know more about your dog’s body, you may like to read “Can Dogs Have Abs?” here.

Do Dogs Have Belly Buttons?

Like I said. Dogs do have belly buttons. In fact, all of them have one! It doesn’t matter what breed your dog is, you would always find a belly button on them, just like us. You’re now probably wondering what my dog’s belly button looks like? We’ll get there shortly!

So to answer: Do dogs have belly buttons? Yes! Even though they have one, the resulting belly button is not prominent after their puppy stage for a couple of reasons. For one, dog umbilical cords are much much smaller compared to a human. We require more nutrients to sustain a human baby which will then result in a bigger scar.

Another one is that the puppy’s umbilical cord heals into a small slit rather than the usual round hole we find on ourselves. The belly button isn’t exactly shaped like a button as it blends into the dog’s skin. Lastly, for obvious reasons, the belly button will then be covered in fur which will make it difficult to find.

You may like to read: 10 Best Dog Repellent Spray Review

Actually, all mammals will have belly buttons after birth. Scientifically speaking, we refer to belly buttons as “umbilicus”. It is a residual scar caused by the cutting of the umbilical cord. Also, the belly button serves as a remnant of the placenta which nurtures the baby as it develops and grows inside the mother.

Like us and other mammals, the placenta and umbilical cord are the two most important organs of the pup as it slowly grows inside the womb. The primary function of these organs is to supply oxygen and vital nutrients. At the same time, it is also responsible for removing waste.

The mother will chew off the placenta, the remains of the umbilical cord since it is no longer needed. After a few days, the cord will eventually dry, contract, and fall off and leave behind a small car – the belly button.

Do Dogs Have Belly Buttons- What Does it Look Like?

Dog’s belly buttons are uniquely shaped compared to humans. As mentioned earlier in this article, a dog’s belly button resembles more of a slit rather than a round hole that we have as humans.

In general, all the belly buttons of dogs look alike. Human belly buttons aren’t as consistent looking as dogs because there are what we call “innies” and “outies”. Innies look like a little hole or a pit while outies resemble a little bump.

For dogs, their belly button is generally just a flat elongated scar, never an innie. If the bully button is somewhat protruded or embossed, it might be a sign of an underlying condition such as a hernia or even poor closure of muscles. Seek help from your local vet immediately.

So to answer again: Do dogs have belly buttons? Yes, they have! I’ll tell you how to search for it in your dog.

You may have a tough time finding your dog’s belly button if they are especially hairy. For shih tzu, maltese, and poodle owners, good luck! Even with short-haired dogs, it may sometimes be very hard to see.

Look for it around the base of your dog’s ribs right in the middle of the abdomen where tufts of hair meet. You’ll be looking for a barely noticeable vertical scar. It can also look like a tiny wrinkle, an oval, or even a rosette scar.

Do Dogs Have Belly Buttons- Humans vs. Dogs

Our belly buttons are residual scars that remained where we were once connected to an umbilical cord. The umbilical cord was our lifeline in our mother’s womb in order to receive the nutrients we need as we grow. Almost all mammals have umbilical cords like us and dogs. Both dogs and humans are placental mammals which would have belly buttons.

Puppies come out in a sac filled with placental fluid connected to the umbilical cord. For every puppy that is born, the mother will bite off the umbilical cord which leaves a flat scar, the belly button, after it dries up. Of course, for us humans, it simply cut off the cord and let heal for a few days.

Unlike some human babies, dogs pay little attention to their belly buttons. There are some studies and theories as to why dogs’ belly buttons aren’t as distinctly visible as humans.

One thought is that humans tie the umbilical cord while dogs, on the other hand, chew it This might account for the difference. In addition to that, a puppy’s umbilical cord is also much much smaller in size and diameter making it a way less noticeable belly button.

Remember, a protruding belly button after an early growth stage is a possible sign that your dog might be experiencing improper close of the muscles. Worst case scenario would be an umbilical hernia.

Umbilical hernias are typically diagnosed as a bump or swelling on the lower underbelly of your pup. This is where the umbilical cord is attached before. Sizes may vary depending on the size of your dog, but they are soft and may change in size eventually.

Inspect and observe your puppies especially around the belly area. We have to make sure that no hernia is developing during the first few months which is the most crucial part. Also, some dog breeds are more prone to this condition than others, but we can never be too sure.

How to Take Care of Your Dog’s Belly Button

Your dog’s belly button isn’t high maintenance. It doesn’t require any special attention. All you have to do is monitor your puppy’s belly button as they grow older to make sure there are no warning signs of a hernia and other issues. Regularly give them baths to avoid infections.

This also applies to adult dogs in order to ensure that they will be happy and healthy all throughout their lives. A large hernia has the potential to cause more complications. It may aggravate to a more serious herniation of the abdomen section. Exposed organs like the intestines might cause strangulation and inhibition of blood supply which is serious.

The best way to take care of your dog’s belly button is to bring your puppy for their first check-up. Your vet will conduct a full physical examination to detect any congenital and developmental signs your puppy might have.

Aside from a full physical check-up and inspection for hernias, there are other concerns as well. Some of the assessments include the following: jaw alignment, presence of palate defects, eye and ear functions, cardiac auscultation, and reproductive organs.

Wrapping Up – Do Dogs Have Belly Buttons?

Next time you’re rubbing your dog’s belly, take a look and see if you can spot her belly button. Appreciate the small things! This particular part of the dog’s body may be small, but it holds a lot of significance to their development and growth. A dog’s belly button is a sign that your dog was well-nurtured in their mother’s belly.

Keep in mind that belly buttons can look abnormal in some dogs. This may be an underlying symptom of possible hernia and other abdominal complications. Make sure to see your vet as soon as possible, especially for newborn puppies.

FAQs – Do Dogs Have Belly Buttons?

Why is my dog sniffing my belly?

Dogs love human navels because they trap in some lint and sweat. Your dog may like that scent, so they tend to lick it. Don’t worry because it is perfectly natural for dogs to behave like this. You can always train them and use positive reinforcement if this is bothering you.

Why can’t I see my dog’s belly button?

It is very easy to see the belly button on puppies especially without all the hair to hide it. Once your dog reaches adulthood, it’s very likely that it has fully healed, therefore not that visible. This is because dog umbilical cords are much smaller than ours which would leave a small scar.

Do only male or female dogs have belly buttons?

Regardless of the sex, all dogs should have a belly button. As mammals, dogs would need an umbilical cord for them to fully develop before birth. This will leave a residual scar called a belly button.

Why is my dog’s belly button red?

Your dog’s belly button might be red because it might have mites, ticks, or fleas. These pests, if not taken care of, will linger on your dog’s skin which may cause a series of infections and rashes, especially in the stomach area where there is little hair.|

Are umbilical hernias dangerous for my dog?

An umbilical hernia is a condition that you should not take lightly. Although it is quite small, it may cause some serious infections if not addressed properly and immediately. If you see a weird lump on your dog’s belly button, make sure to see a vet to receive proper care.

K9FitClub may receive commissions when you click our links and make purchases. However, this does not affect which products are included in our articles. We keep our reviews and comparisons fair and balanced, in order to help you make the best choice for your pets.

K9fitclub.com is a participant in the Amazon Services LLC Associates Program, an affiliate advertising program designed to provide a means for sites to earn advertising fees by advertising and linking to Amazon.com. Amazon and the Amazon logo are trademarks of Amazon.com, Inc, or its affiliates.